Home | Resources | The political economy of results-based financing: the experience of the health system in Zimbabwe 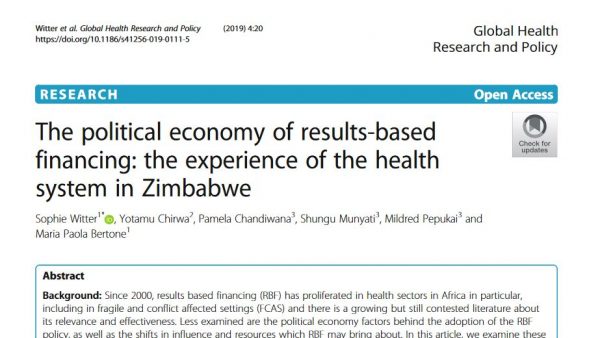 The political economy of results-based financing: the experience of the health system in Zimbabwe

Since 2000, results-based financing (RBF) has proliferated in health sectors in Africa in particular, including in fragile and conflict affected settings (FCAS) and there is a growing but still contested literature about its relevance and effectiveness. Less examined are the political economy factors behind the adoption of the RBF policy, as well as the shifts in influence and resources which RBF may bring about. In this article, we examine these two topics, focusing on Zimbabwe, which has rolled out RBF nationwide in the health system since 2011, with external support.

The study uses an adapted political economy framework, integrating data from 40 semi-structured interviews with local, national and international experts in 2018 and thematic analysis of 60 policy documents covering the decade between 2008 and 2018.

Our findings highlight the role of donors in initiating the RBF policy, but also how the Zimbabwe health system was able to adapt the model to suit its particular circumstances – seeking to maintain a systemic approach, and avoiding fragmentation. Although Zimbabwe was highly resource dependent after the political-economic crisis of the 2000s, it retained managerial and professional capacity, which distinguishes it from many other FCAS settings. This active adaptation has engendered national ownership over time, despite initial resistance to the RBF model and despite the complexity of RBF, which creates dependence on external technical support. Adoption was also aided by ideological retro-fitting into an earlier government performance management policy. The main beneficiaries of RBF were frontline providers, who gained small but critical additional resources, but subject to high degrees of control and sanctions.

This study highlights resource-seeking motivations for adopting results-based financing in some low and middle income settings, especially fragile ones, but also the potential for local health system actors to shape and adapt RBF to suit their needs in some circumstances. This means less structural disruption in the health system and it increases the likelihood of an integrated approach and sustainability. We highlight the mix of autonomy and control which RBF can bring for frontline providers and argue for clearer understanding of the role that RBF commonly plays in these settings.

NB Maria Bertone gave a presentation on this work at the Fifth Global Symposium on Health Systems Research in Liverpool in October 2018. Read it here.