Home | News and Events | “Together we do!” Establishing a female CTC providers’ support group 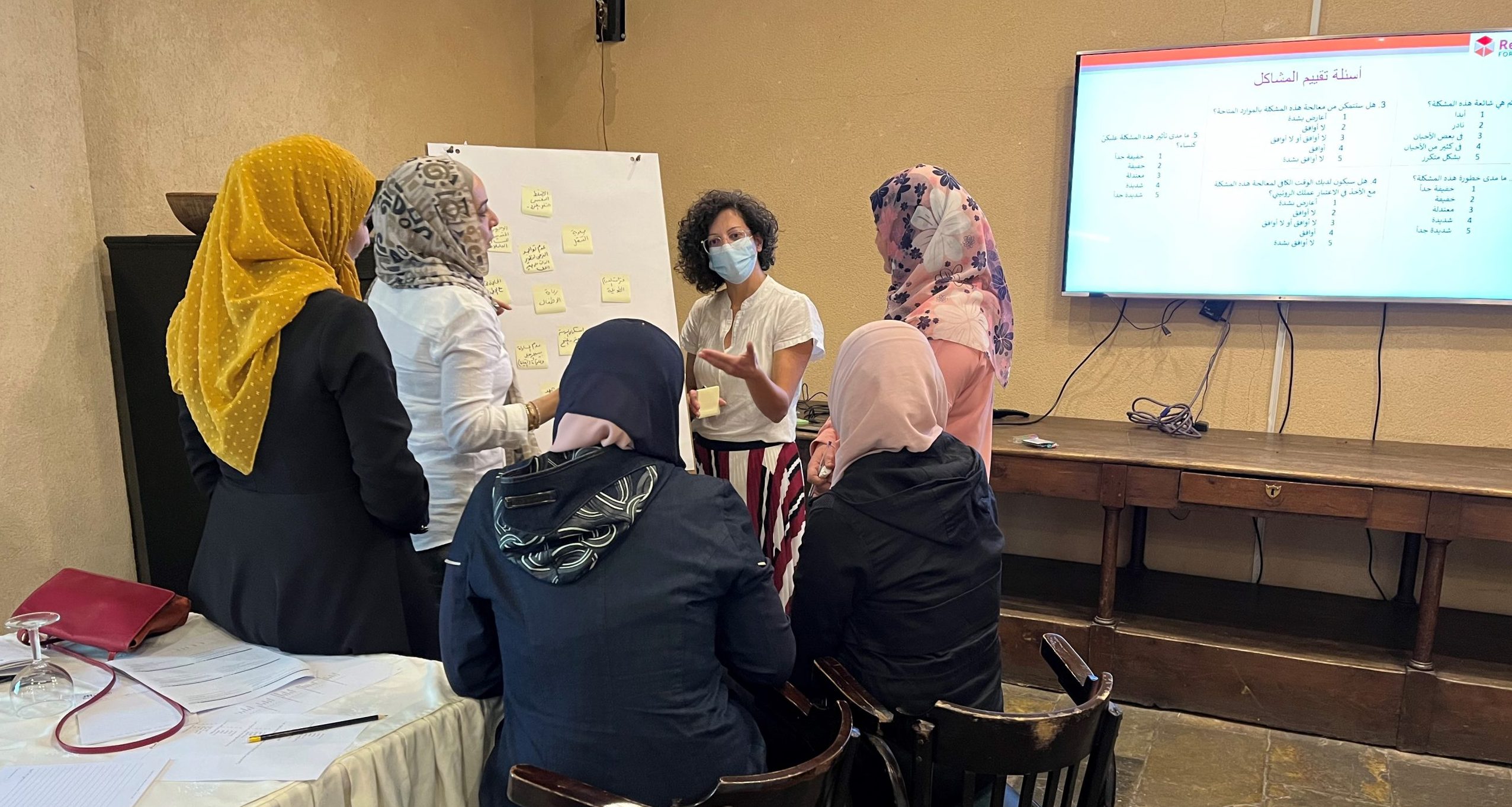 Fig 1. The women analyse their problems

“Together we do!” Establishing a female CTC providers’ support group

In July 2022, the ReBUILD for Resilience team from Liverpool School of Tropical Medicine (LSTM) and American University of Beirut (AUB) visited Chtaura town in Beqaa Valley, Lebanon. There they took part in a series of workshops with local close-to-community (CTC) healthcare providers from the Syrian refugee community. Together they explored issues around the challenges that CTC providers face in their work as female health workers, refugees and mothers.

Who are the women participating in the workshops?

During the ReBUILD for Resilience study on the gendered experience of CTC providers during COVID-19, the AUB team interviewed eight female CTC providers in Beqaa Valley. All were the sole breadwinners of their families at that time, all had small children, all were refugees and all were employed informally in healthcare during the COVID-19 outbreak. During interviews the women gave insights into their daily lives and identified the support they would need to be able to manage their roles as both health workers and mothers, especially during shocks and turmoil. When a follow-on study was planned, AUB contacted those women to invite them to participate in the workshop to discuss and jointly problem solve the challenges that impact on their health and well-being. All of the invited women accepted the invitation with enthusiasm, motivated to come together and to find solutions to the difficult home and work conditions they endure.

Participatory action research (PAR) was the technique used during our workshops. We chose this approach to help the women explore the challenges they face in their work, family life, and society at large, and to select actions to overcome some of the obstacles impeding their freedom and wellbeing. PAR can put the participants at the centre of decision-making processes, ensuring meaningful and equitable participation, ownership and long-term sustainability of interventions.

In two consecutive workshops, the CTC providers came together with ReBUILD team members to discuss the results of the study, to share individual gender experiences and insights, to identify the issues that they face in their daily lives as working women and mothers, and to select possible solutions. During the first workshop, participants described and rated the challenges they face according to the severity of the problem, the prevalence of the problem in their lives, and the importance of the problem within a gender perspective. Those challenges were then grouped (High impact = 110-120, Moderate impact 100-109 & Low impact <100).

It became clear that the women allocate greater importance to structural issues that cannot be easily modified at the community level, eg regulation of refugees’ work in Lebanon, exploitation and overworking, feeling excluded and unwanted by the Lebanese population etc, over problems directly related to gender, eg economic exploitation, the double responsibility of breadwinning and family care, and discriminatory gender norms in society at large.

With regard to the double burden of responsibility, a 34-year-old participant (now a volunteer health educator in outreach teams but previously a pharmacist in Syria) stated:

“I didn’t study to sit at home. I have the right to have a decent job description despite being a refugee, which means a better salary and more rights at the workplace.”

During the workshop, poor recognition of the value of women’s paid work was seen. Two participants asked that we not publish their photos online for fear of being recognised by their families in Syria. One of them said:

“If my father understands that I work, he will reprimand my husband, and claim me back to my paternal house”.

When prompted to select a single problem to address the women decided not to consider structural problems that they cannot influence, eg their refugee status or strict gender norms, and instead focused on the daily issues over which they have some control, even if they rated them lower in terms of severity and prevalence.

Following a group vote the problem “Double burden of responsibilities” was selected as the problem to be analyzed. One 40-year-old nurse, employed in an informal health facility, illustrated the challenge:

“The woman is first a mother before she is a worker, so she has to take care of her family and children, she has to prepare the meals, clean the house, all these chores in addition to her job duties. So, we, as working mothers, are under a lot of pressure”.

A problem tree analysis explored the problem selected, its root causes and its consequences. The analysis and its translation are shown here: 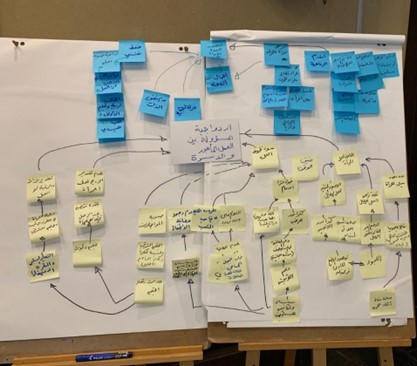 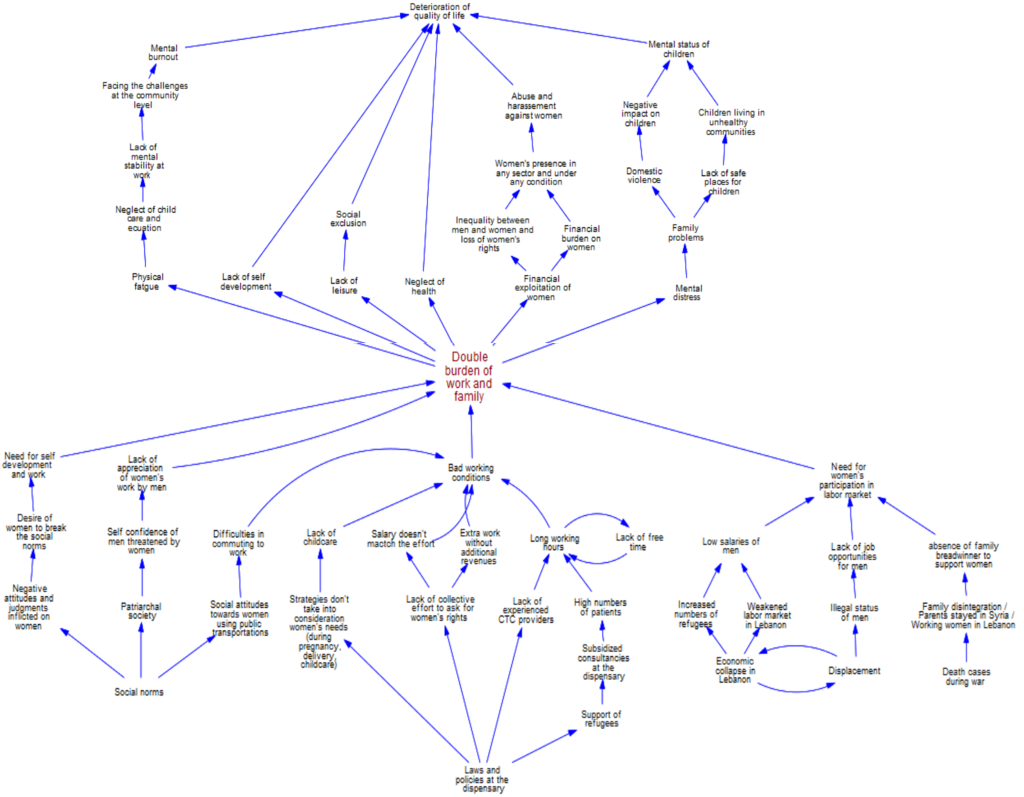 Alleviating the pressure of the double burden of work and family

What sort of intervention could help address this double burden? The group’s conversation considered organizing leisure activities with the family, petitioning employers for childcare and secure commuting to work, educating husbands, professional training, but every suggestion was questioned. “Who will do that?” Who will accept that?” One of the participants, a health educator working in the Aarsal region said: “We do this together”. The others liked the idea of collective action by healthcare workers, and unanimously agreed to form “a support group”. Thereafter they considered how such a support group might benefit them and realised that almost all the factors they cited as causing the double burden of responsibility could be resolved by an active and competently managed support group. They included those same ‘structural’ problems that they had rated highly but then resigned themselves to not considering because of the difficulty of addressing them. Indeed, the support group can play the role of a syndicate, advocating, lobbying and negotiating for their rights. A participant said:

“Maybe it would take time, but at the end it will do and meanwhile, the support group can make our life easier, by organizing mutual support and collective action”.

This idea came as a revelation to us, people working in academia. While preparing for the workshop we imagined an intervention addressing one aspect of the problem, such as psychosocial support to support the mental health of women, or the organization of meetings to give them an opportunity to vent their problems and understand that they are not alone in those difficulties. We did not imagine that the participatory action we proposed would lead to such a radical, revolutionary aspiration from the participants, focused on the rights of women but with an acceptance of their duties.

This support group will be formed of working women (not exclusively healthcare workers). Our eight participants will form the first board, establishing the group and learning how to run collective activities, until elections of the general assembly designate a new board. After the establishment of this support group, and the recruitment of as many women as possible of all nationalities who live under similar conditions of double burden and exploitative work conditions, the main actions will be:

● To advocate, lobby and organize protests for women health workers’ rights to decent and equal pay.
● To negotiate deals and purchase at preferential rates important services, such as health insurance, professional training, and different services meant to alleviate hardship in working women’s lives and to improve wellbeing.
● To organize services collectively, such as day care and after-school services, including providing assistance with homework, catering, other domestic chores, transportation, leisure and picnics to improve bonds between parents and children, allowing them to relax together.

This group will be the channel through which women will support each other in managing household chores, taking care of each other’s children (ie babysitting when someone has a late shift), and finding job opportunities for women in need (ie women-headed households). At the same time, the group will lobby for working women’s and informal workers’ rights and propose solutions to the most pressing problems encountered. The group will also work as a therapeutic space for those women, providing mental health support and relieving the stress of juggling multiple responsibilities while they are away from their families (eg grandmothers back in Syria) and are feeling isolated in Lebanon without family support.

We will work with local community organisations to advise and assist this support group to recruit members, to engage in advocacy and promotion, and to be able to attract financial support, at least until membership fees are able to finance the different projects. ReBUILD for Resilience will support the eight CTC providers in mapping and engaging with stakeholders and advocating for a small amount of funding. We will also provide a small amount of funding to kick-start the group in its advocacy and support roles.

The current board has decided to give the group the name “Women’s will”. We will let you know about the women’s progress in founding and running their support group.