Home | News and Events | The politics of health 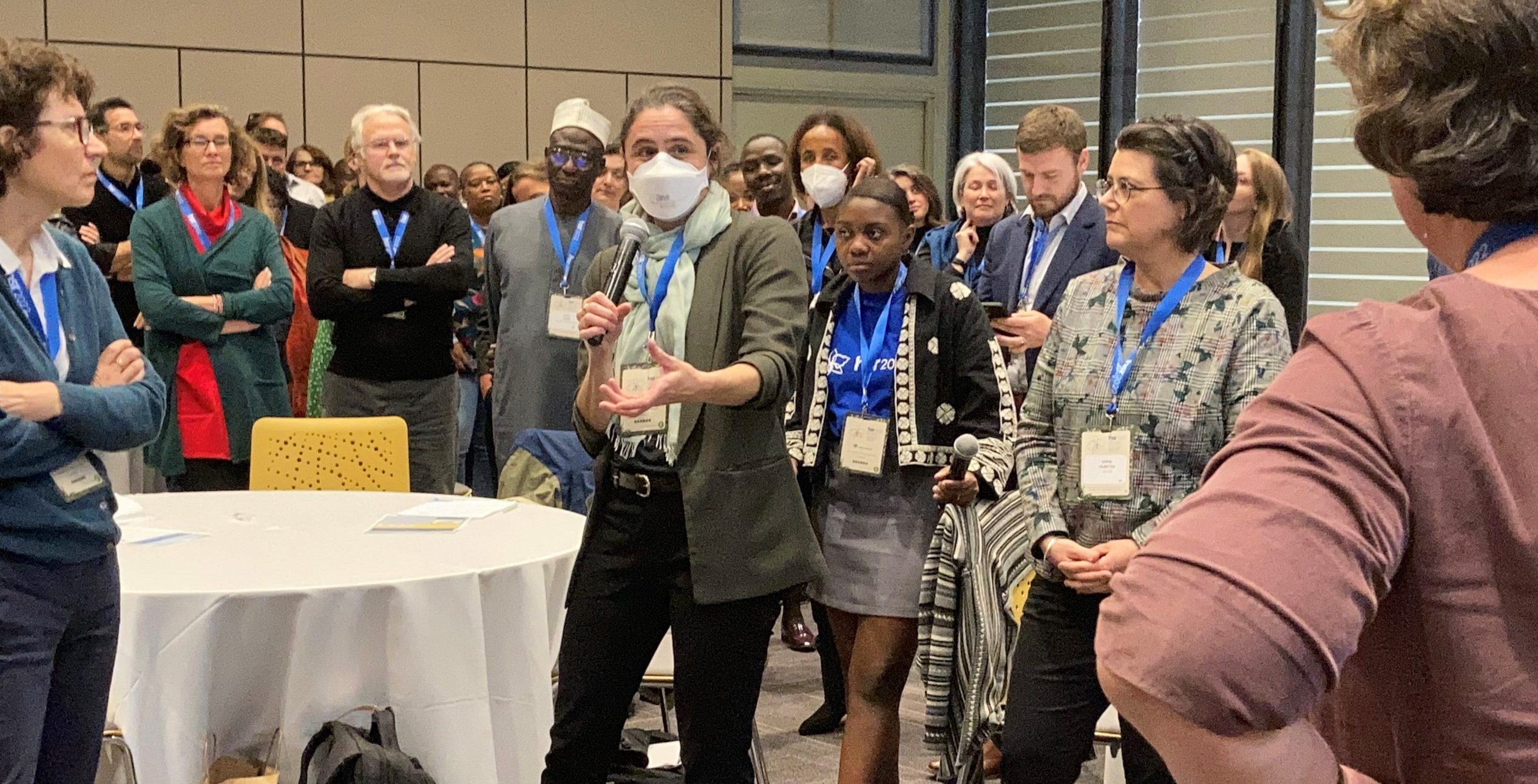 The PERFORM2Scale session at HSR2022

The politics of health

The theme of the 2022 Seventh Global Symposium on Health Systems Research (HSR2022) [opens new tab] was Health Systems Performance in the Political Agenda: Sharing lessons for current and future global challenges. This is an exceptionally broad topic and this diversity was reflected in the sessions available to both physical and virtual attendees. They covered everything from capacity strengthening and policy making to global communications and decolonisation. The plenary sessions covered four key areas:

ReBUILD for Resilience staff (shown in the below image) were able to attend a number of sessions and have picked out some presentations that particularly struck us for the insight they gave into the importance of politics in global health. Some recurring themes emerged including the importance of leadership, trust, collaborative working, flexibility, community engagement, representation of vulnerable groups, opportunism and pragmatism.

The opening plenary – Intersectoral collaboration and integrative governance on the road for health in all policies – was unfortunately blighted by technical problems and gave a limited overview of the theme for the symposium. One speaker who was able to present – Dr Beatriz Londoño, former Colombian Minister of Health – gave an insight into politics at the policy level. From the outset she told those gathered that health actors of all kinds need to think and work politically, with collaboration a definite watchword. Dr Londoño promoted the importance of collaborative governance with both health and non-health partners. She argued that far from resulting in a loss of state power as some politicians fear, such an approach gives legitimacy and transparency to an administration, ensuring it is both acting and being seen to act democratically. Governments cannot act or survive in isolation she reminded us. Instead, all politicians – and those acting politically – must mobilise capacity and resources and speak to stakeholders through a clear, friendly, trust-building communications strategy, using powerful narratives and evidence-based conversations. There is no place for hollow political rhetoric.

She also outlined what can happen when politicians do not act collaboratively, giving the example of her own administration where she was launching an anti-smoking campaign while the Treasury was giving tobacco companies tax breaks. Health systems can also act apolitically, instead becoming ‘over-prescriptive’ and failing to develop bidirectional relationships with non-health partners at every level.

National-level politics was also in evidence at the PERFORM2Scale [opens new tab] session. At a symposium on the theme of the political agenda but which seemed to host few policy makers, the presence of Joseph Okware, Director of Governance and Regulation from Uganda’s Ministry of Health, was unusual. Dr Okware also spoke frankly on the challenges and facilitators of scaling-up a management strengthening intervention, and the difficulty in managing expectation, political reality and unexpected factors such as COVID-19. Dr Okware had been involved in the PERFORM2Scale intervention since a District Health Officer and was able to give a unique perspective from both sides of the policy fence, arguing that politics cannot be left until an intervention is underway. If policy-level change is to be achieved the relevant Ministry of Health should be involved as early in the process as possible, as should other stakeholders who can support change. Sharing evidence about an intervention, and the language that we use are critical to engaging with key stakeholders. Constant engagement and honest feedback are vital. Like Dr Londoño, Dr Okware also argued for the importance of propitious timing, flexibility and pragmatism – politics are a bumpy road.

ReBUILD staff and colleagues at HSR 2022

A session co-organised by WHO and Queen Margaret University/ReBUILD for Resilience highlighted lessons from Thailand, Nepal, Jordan and four countries in francophone West Africa in using political economy analysis strategically to promote more effective adoption and implementation of health financing reforms, working with actors from a range of constituencies, including beneficiary groups, Ministries of Finance and other budget holders, politicians and bureaucrats. Kefi Bello from CERRHUD in Benin shared research on the usability of political economy approaches by policymakers in the region which highlighted the interest in it, as well as practical challenges. The session promoted the use of political economy not just as a retrospective analytical approach but as proactive tool for change, very much in keeping with the keynote address given by Michael Reich on the second day of the symposium.

The politics of COVID-19

Inevitably, COVID-19 and governments’ responses to the pandemic featured in many presentations. Racha Fadallah from American University of Beirut presented The predictors of COVID-19 mortality among health systems parameters: An ecological study across 203 countries which found that the majority of governments in her study failed to properly mobilise policy implementers and frontline actors, providing no clear guidelines on roles and responsibilities. This failure had obvious implications for the health systems’ response to the crisis and the subsequent death tolls; fragmented authorities and a multiplicity of actors, a lack of legitimacy and a distrust of government, competing interests for government resources, and lack of accountability. Conversely, decisive political leadership, prior relationships between sectors and entities, a national framework of crisis management and policy learning from previous experiences all contributed positively. Governments – like health systems – can and should learn.

Politics featured strongly in the Thematic Working Group (TWG) on Fragile and Conflict-Affected Settings session [opens new tab], Reducing conflict, confronting pressure: Health system and policy response to the humanitarian and health crises as a result of international migration in Latin America. Levels of migration in the continent have increased exponentially recently, putting untold pressure on existing services and migrants themselves. This conversation between the TWG’s committee member, Barbara Profeta, and colleagues working on migration in different Latin America contexts gave a stark insight into the realities of the situation.

The importance of a better understanding of and support for local border solutions was one key message, with a need for informal structures and networks of support, eg women’s groups and action to address gender-based violence. This is partly dependent on the health system’s ability to register, document and fully examine experiences within the migrant health system – stories, tragedies, vulnerabilities, stigma and discrimination – which must all be done through an intersectional and psychosocial lens.

While the cost of healthcare to migrants is widely acknowledged, the cost of doing nothing – or too little – was recognised by the panel. What happens when we ignore an escalating migration situation? What are the costs of not providing preventive health services? The need to view the issue and associated problems from a political economy perspective was noted, as was the need to address the problem at a regional level. We need to move beyond seeing health as a purely national Ministry of Health concern, and instead as an all-encompassing challenge.

The closing plenary focused on primary health care and new technologies. Dani Da Costa, an Emerging Voice for Global Health 2022, gave a powerful statement addressing how to make quality healthcare accessible in-country and by extension globally, by focusing on “participatory bottom-up approaches”. This resonates with the ReBUILD for Resilience action research project being implemented in Sierra Leone (more details here), designed to support community resilience in the face of a shock and in support of the overall response. The research cycle involves mapping the current solution, identifying leverage points or problems, co-creating solutions to identified problems and then implementing the solutions – allowing for documentation and reflection throughout the cycle. This ensures sustainable ownership and leadership at community level. Furthermore, strengthening community resilience can be complimented by ensuring effective and efficient financing for primary health care (PHC) – often the first point of call for those seeking both routine and shock-related care from the health system. However, financing for primary health care is often insufficient. One of the speakers, Dr Chima Onoka, gave a strong message saying that policy makers, politicians, government officials and development agencies should prioritise sustainable financing for PHC.