Home | Resources | Performance-based financing in the context of the complex remuneration of health workers: findings from a mixed-method study in rural Sierra Leone

Performance-based financing in the context of the complex remuneration of health workers: findings from a mixed-method study in rural Sierra Leone 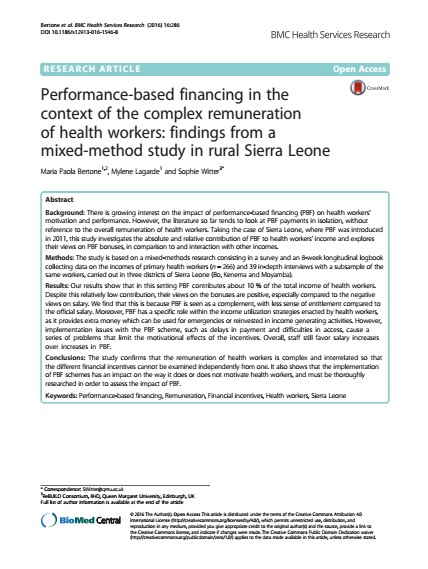 This paper is based on work carried out under the ReBUILD affiliate project Health Workers’ Remuneration, Incentives and Accountability in Sierra Leone.

The study investigated the absolute and relative contribution of performance-based financing (PBF) to health workers’ income and explores their views on PBF bonuses, in comparison to and interaction with other incomes. The study confirmed the complex and interrelated nature of health workers’ remuneration and that the different financial incentives cannot be examined independently from one. It also showed that the way PBF schemes are implemented has an impact on health worker motivation.

Background: There is growing interest on the impact of performance-based financing (PBF) on health workers’ motivation and performance. However, the literature so far tends to look at PBF payments in isolation, without reference to the overall remuneration of health workers. Taking the case of Sierra Leone, where PBF was introduced in 2011, this study investigates the absolute and relative contribution of PBF to health workers’ income and explores their views on PBF bonuses, in comparison to and interaction with other incomes.

Methods: The study is based on a mixed-methods research consisting in a survey and an 8 week longitudinal logbook collecting data on the incomes of primary health workers (n = 266) and 39 in-depth interviews with a subsample of the same workers, carried out in three districts of Sierra Leone (Bo, Kenema and Moyamba).

Results: Our results show that in this setting PBF contributes about 10 % of the total income of health workers. Despite this relatively low contribution, their views on the bonuses are positive, especially compared to the negative views on salary. We find that this is because PBF is seen as a complement, with less sense of entitlement compared to the official salary. Moreover, PBF has a specific role within the income utilization strategies enacted by health workers, as it provides extra money which can be used for emergencies or reinvested in income generating activities. However, implementation issues with the PBF scheme, such as delays in payment and difficulties in access, cause a series of problems that limit the motivational effects of the incentives. Overall, staff still favor salary increases over increases in PBF.

Conclusions: The study confirms that the remuneration of health workers is complex and interrelated so that the different financial incentives cannot be examined independently from one. It also shows that the implementation of PBF schemes has an impact on the way it does or does not motivate health workers, and must be thoroughly researched in order to assess the impact of PBF.

Health financing (107)
Health workers (125)
Incentives (53)
Performance-based financing (34)
Sierra Leone (92)
< Back
< Previous Resource
Next Resource >
We use cookies on our website to give you the most relevant experience by remembering your preferences and repeat visits. By clicking “Accept All”, you consent to the use of ALL the cookies. However, you may visit "Cookie Settings" to provide a controlled consent.
Cookie SettingsAccept All
Manage consent