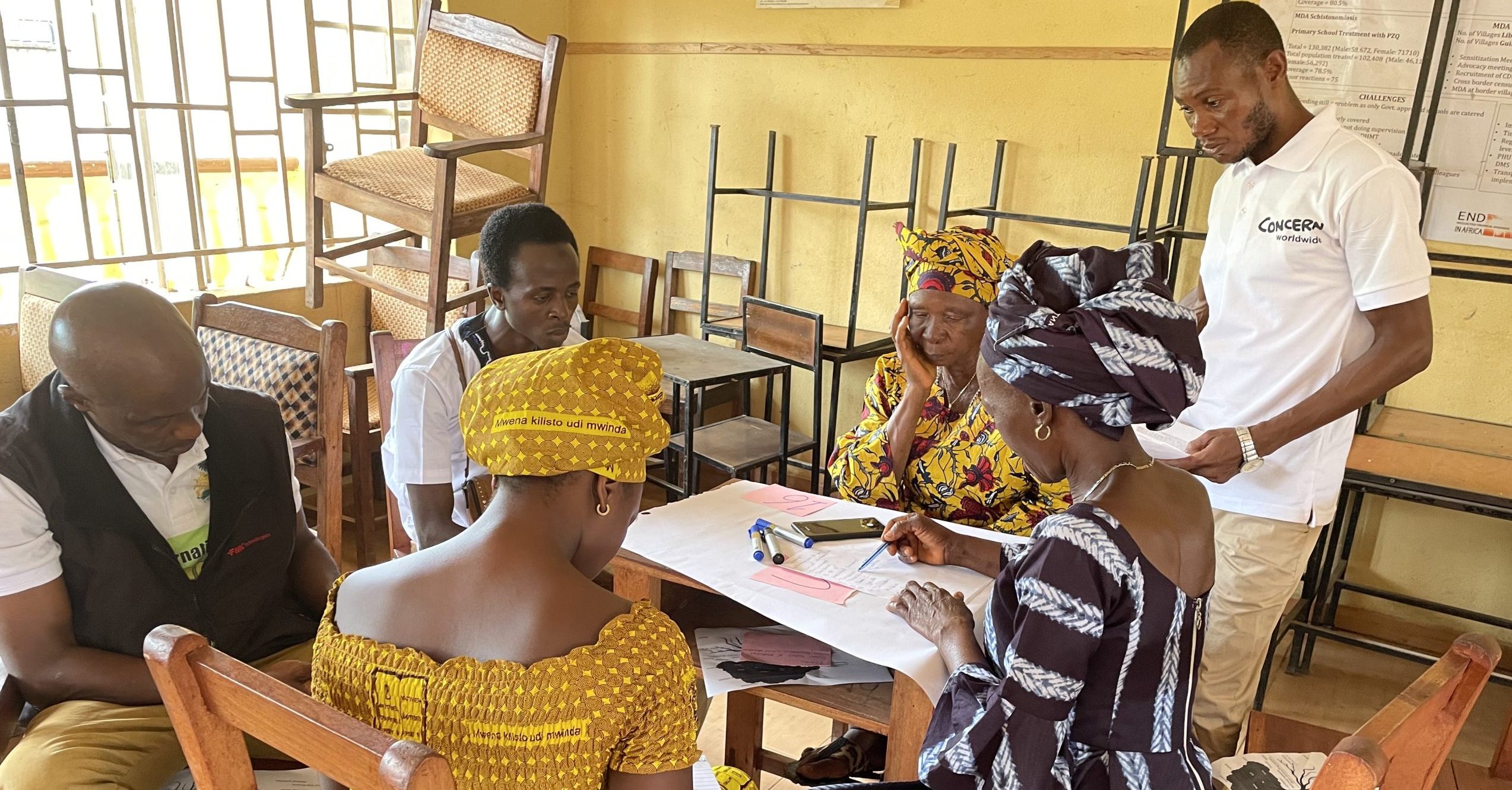 In this blog post, Lansana Hassim Kallon and Morris Tamba of COMAHS discuss the importance of participatory action research and engagement with key community stakeholders, and reflect on its effectiveness in battling health emergencies, and building stronger health systems.

During the outbreak, Lansana served as an alert responder with Action Against Hunger (Action Contre La Faim) at the District Ebola Response Center in Moyamba in 2015, and it was clear that excluding communities from health policy designs or implementing outbreak response guidelines can be detrimental. In the early stage of the Ebola outbreak, between August and September, communities defied rules around isolation and containment of the Ebola disease, taking care of the dead and sick, leading to high morbidity and mortality from the virus, especially in Ribbi Chiefdom.

Realising the lack of community engagement, World Vision International and partner NGOs quickly adopted a smart community engagement alliance. Communities were provided with basic infection control training, which allowed them to work with burial teams to prevent virus transmission. This resulted in a reduced number of Ebola fatalities and morbidity, making the Moyamba District one of the quickest to contain the virus.

Community participation in ranking stakeholders’ influences on community engagement helped us as researchers understand the power of each stakeholder identified, how influential they were and how those stakeholders could help with resolving health systems challenges. The most interesting part of this process was seeing how community members could help researchers identify the kind of power and influence stakeholders could wield within their communities. It broadened my understanding of how key stakeholders can impact customs, laws and regulations, guiding communities towards good practices regarding their wellbeing.

Cultural factors are often not considered when designing guidelines, but most communities in Sierra Leone are heavily steeped in cultural traditions. For instance, tradition demands that special burial rites be performed on deceased traditional and eminent community leaders. If communities were not properly engaged around the importance of following Ebola burial guidelines, following traditional rites led to unsafe burial practices.

By engaging community members on health issues during the Ebola outbreak they had knowledge which proved useful during the COVID-19 pandemic. The low reported rate of COVID-19 deaths and illnesses in Sierra Leone showed that communities quickly adopted lessons learnt from the Ebola response in the fight against the COVID-19 pandemic. Despite how clearly effective these community participation interventions were, the importance of the role communities can play in health policy design and implementation has still not been fully realized.

Participatory action research (PAR) has not been widely used in Sierra Leone but has proven important. To ensure a resilient health system at the community level, the FCDO-funded ReBUILD for Resilience project is being implemented by the College of Medicine and Allied Health Sciences, University of Sierra Leone (COMAHS-USL) team in Sierra Leone. The team designed a research study, Working with community leaders to address shocks, increase inclusivity, accountability and trust, and support health system resilience in Sierra Leone, conducted in two districts, Kailahun and Moyamba. 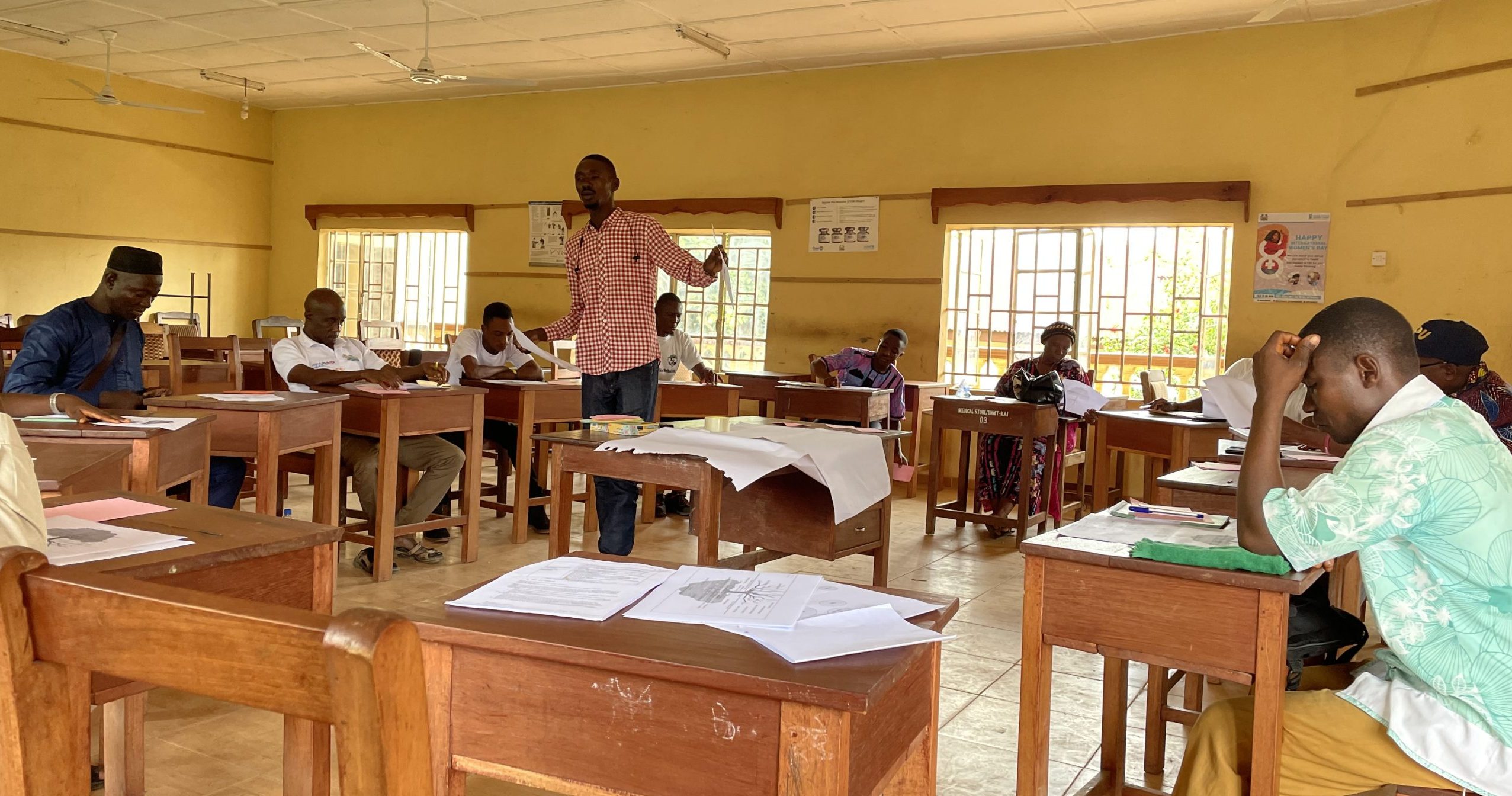 This study aims to provide further insights into the current engagement of community leaders in response to health shocks through an inclusivity and accountability lens. It also co-created and tested approaches to support and improve engagement to promote accountability and trust in a context often characterized by mistrust; develop resilience capacities in the health system; and improve the resilience and effectiveness of the health system in the longer term. The team has adopted the participatory action research with community leaders, divided into four phases.

Phase 0 involved undertaking a document review to dig out and review all available literature and relevant documentation on formal, traditional and informal authorities at the local level in Sierra Leone, with a specific focus on the health sector but not limited to it, including laws and practices.

Phase 1 involved a participatory power mapping of community leaders concerning the health system, through participatory methods with community members, to identify the most representative and influential leaders at the community level and understand their power and roles concerning health and the health system. Three workshops were conducted with three different groups, including those identified as formal leaders, informal leaders and community members. Community stakeholders played key roles in identifying other powerful and trusted stakeholders to influence community engagement, which helps select stakeholders to work with and quickly determine the most effective decision-making. Through our interaction with participants, we learnt that power dynamics could influence who makes the decision and how that decision can influence the rest of the community.

Phase 2 involved identifying leverage points and an action agenda to identify the challenges and potential of engaging community leaders in (public) health interventions and emergency responses, which gave us valuable insights as researchers into the needs of communities and demonstrated their understanding and positionality. These were represented in a problem tree, which gave a clear picture of which issues are imminent and how resolutions can be found to fix those issues in the most efficient ways, helping us to understand challenges and barriers for community leaders to engage in public health interventions and emergency responses and develop shared understandings. The problem tree analysis has been an eye-opener on how to address issues affecting communities, providing them with sustainable solutions to their problems. The pathway to change could also be useful, aiding communities to agree on which problems most affect them and what actions they can take to get a sustainable solution.

In the second workshop, we used a Venn diagram to map the villagers’ view of the importance of their institutions, organisations, groups and individuals. The third and fourth workshops were conducted on the action agenda, with community representatives and district stakeholders reviewing a problem tree, assigning actions to actors in the Venn diagram, and developing agreed change pathways to be implemented in the third phase of the project.

Phase 3 will involve implementing actions, reflecting and documenting processes, and adapting and learning. In this phase, researchers will collect data and participate with research participants and community leaders through critical reflection meetings.

This research cycle will allow for reflections, documentation, adapting and learning. It also allows for co-creation, which supports community leadership and ownership. In support of this, the District Health Management Teams served as an institutional base for the process, with Phase 3 implemented using the resources and structures currently available at the district level, ensuring sustainability. A gender, equity, social justice and inclusivity lens was used throughout the research process.

Overall, it is very important to involve the community to identify actions that can be taken, and which community stakeholders should take charge of the process. During this process, it was clear that communities recognize the problems they face and who can help to solve these problems. If the capacities of communities can be built on, allowing for local ownership and the utilisation of locally available resources to solve health issues, this could lead to more robust and sustainable community health systems and less dependence on the national health systems support in the long term. The District Health Management Team will ensure the sustainability of this process.

The team is also planning to engage policymakers after a year of the implementation through key informant interviews and conduct power mapping to determine how power dynamics have changed.
Our use of community participation has been proven effective. Communities are custodians of their land; they know their population and can recognize their needs easily. Therefore, in any health research, program design, guideline design and implementation, communities should be engaged and encourage to take the lead, by providing them with technical support from a district medical team to address their health needs. Co-creation is one important way this can be achieved.

To sum up, we believe community participatory action research should be part of the research curriculum and given more prominence among other research methods.